You have Successfully Subscribed!

This is an update to the data collected for Set to Lead. Undertaken in collaboration with Oxford Research and Policy for the Women’s Engineering Society 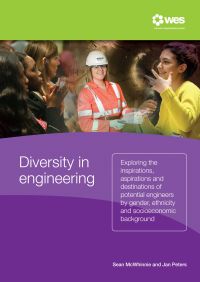 WES wanted to capture the messages from the women students in  the survey part of the Set to Lead project. A full and summary report were produced in January 2015 and launched as part of Science and Engineering Week at the Royal Academy of Engineering.

The aim was to share the experiences of engineering study.

An addition to the project was a set of three focus groups held in London, Cardiff and Birmingham with WES student groups to find out the experiences of female students from disadvantaged areas, where parents had not studied engineering or where the women had not made a typical A level choice.

Blitz, who created the ‘Not all chemists wear white coats’ campaign, were appointed by open tender, to capture the focus groups with young people and developed the straplines:

The second project output was a double-sided careers poster, produced in March 2013. By January 2015 this had been reprinted 3 times. The supporting website is engineergirl.wes.org.uk